THE RAYS OF VICTORY BOOK SERIES

Nailing Racism to the Cross 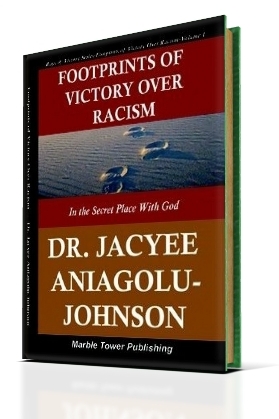 Footprints of Victory Over Racism: In the Secret Place With God - Volume 1

Why is this Christian Non-Fiction Series a Must Read?

Rays of Victory Book Series is about helping you gain individual victory over racism by standing in the victory that Jesus Christ gained for you.

AUTHOR, DR. JACYEE ANIAGOLU-JOHNSON
Please come with me on this powerful trip of the revelation of God’s Spiritual knowledge, wisdom, guidance and empowerment. Let this book Series, RAYS OF VICTORY (RAV), guide you on how to draw daily-renewed strength from God’s Holy Scripture. Let the power of God’s Holy Word and His amazing grace unshackle you forever from the invisible chains of racism.

The RAV Series are inspirational Christian and non-fiction. They deal with racial prejudice, discrimination and how to apply the power and truth of God’s Holy Word, the Bible, to gain individual victory over racism.

RAYS OF VICTORY: NAILING RACISM TO THE CROSS 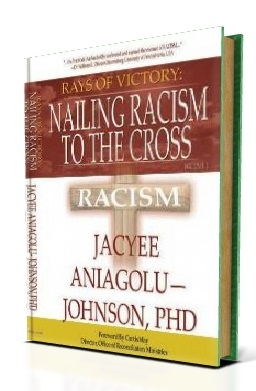 “He canceled the record of the charges against us and took it away by nailing it to the cross. In this way, he disarmed the spiritual rulers and authorities. He shamed them publicly by his victory over them on the cross.” - Colossians 2:14-15

For every child of God defeats this evil world by trusting Christ to give the victory. And the ones who win this battle against the world are the ones who believe that Jesus is the Son of God.” 1 John 5:4-5

The RAV Series focus on what true seeds of racial prejudice are and how one can identify true assaults of racism. These books discuss how to acquire God’s full armor against racism which exposes and demolishes both hidden and blatant racism. While laws may be effective against blatant racism when interpreted and applied in a proper and just manner by brilliant lawyers, it is often difficult to successfully take your legitimate case of covert or subtle racism to court and win. Daily, we are bombarded with all manner of hidden forms of racism and it is virtually impossible to take on every hurtful, oppressive or wicked encounter with covert forms of racism legally. Not only would it be extremely expensive, time-consuming and exhausting, it would be an uphill task to successfully prove each incident or case of subtle racism in a court of law.

The RAV Series explain the futility of solely applying carnal strategies against racism because the stronghold of racism, especially the hidden form of it, lies deep in its seeds of hostility which are sown within the heart of an individual, and which only God has the power to uproot. Rather than dealing with racism merely carnally, the RAV Series recommend applying God’s “spiritual bolt" or "ammunition;” first, by acquiring a solid spiritual foundation in Jesus Christ and receiving God’s Kingdom Power against it. The RAV Series also explain how God’s Holy Word illuminates our heart and mind with true spiritual and self-knowledge and how this helps us manage unrighteous anger, fear, insecurity, self-image distortion due to our experiences with racism, and teaches us to applaud our true spiritual identity in Christ Jesus. Finally, the Series describe the power of forgiving our racist offenders in helping us attain our individual victory over racism.

1. FOOTPRINTS OF VICTORY OVER RACISM-Volume 1: In the Secret Place With God

Illuminating Daily Guide Posts for God's Rays of Victory Over Racism. Readings from "Nailing Racism to the Cross."

2. NOTEBOOK Vol. 1 For  FOOTPRINTS OF VICTORY OVER RACISM-Volume 1: In the Secret Place With God.

3. FOOTPRINTS OF VICTORY OVER RACISM-Volume 2: In the Secret Place With God

Illuminating Daily Guide Posts for God's Rays of Victory Over Racism. Readings from "Nailing Racism to the Cross."

4.  NOTEBOOK Vol. 2 For  FOOTPRINTS OF VICTORY OVER RACISM-Volume 2: In the Secret Place With God.

5. ON THE HAMMOCK: WITH THE SWORD OF THE SPIRIT FOR VICTORY OVER RACISM.[40 days of daily meditation for victory over racism-Volume 1]

6. ON THE HAMMOCK: WITH THE OIL OF GRACE FOR VICTORY OVER RACISM.[40 days of daily meditation for victory over racism-Volume 2]

8. MY RAYS OF VICTORY BIBLE STUDY DIARY: For Victory Over Racism.

12. 150 POWER THOUGHTS FOR VICTORY OVER RACISM. 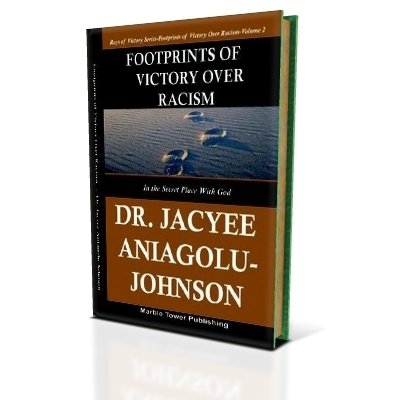 Footprints of Victory Over Racism: In the Secret Place With God - Volume 1

Send to a friend